Lean into social causes, including disaster relief — but keep your political views to yourself. In a political climate fraught with anxiety over issues ranging from gun control to civil rights, that’s the complicated, albeit conflicted, message to real estate leaders.

This is one part of Inman’s five-part Essential Guide for Real Estate Leadership, which we are publishing throughout our first-ever Leadership Week. Read all the parts here. Please send your feedback to leadership@inman.com. If you’re a leader who wants to join us for our exclusive Disconnect in The Desert event on March 26-28, or want to recommend a colleague, send a note to brad@inman.com explaining why.

Lean into social causes, including disaster relief — but keep your political views to yourself.

In a political climate fraught with anxiety over issues ranging from gun control to civil rights, that’s the complicated, albeit conflicted, message to real estate leaders from the 787 industry professionals who responded to Inman’s inaugural Leadership in Real Estate survey during a 10-day period in February.

Yet, somewhat contradictorily, 66.5 percent also believe that it’s unacceptable for their C-level superiors to bring up political, religious or social stances in the workplace or while conducting day-to-day business, according to the Inman survey. 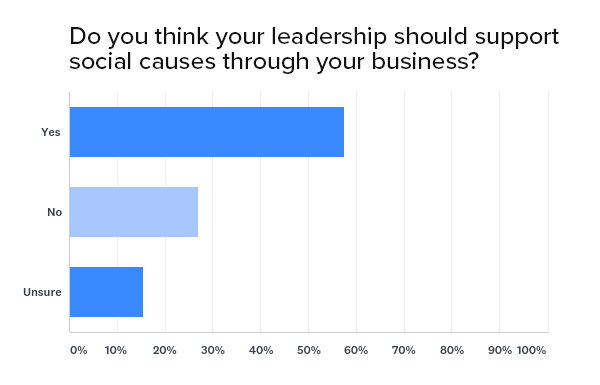 “Like our nation, our brokerage is polarized,” wrote one Texas sales associate with Berkshire Hathaway HomeServices, who said leadership at her company should neither endorse political candidates or raise social issues, religious views or political beliefs in public or during work.

Among the real estate respondents, 60 percent said it was either “very important” or “somewhat important” that company leaders reflect the social issues they care about, while about 52 percent said they believe that their employers share their political views. About 13 percent, meanwhile, said it was “not important at all” that their bosses shared their views. 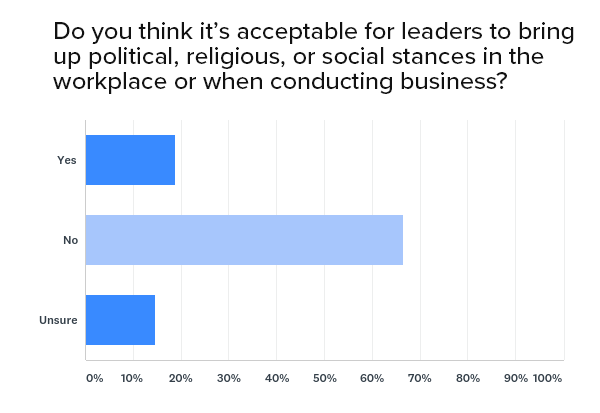 However, a majority of 51 percent of the respondents said real estate leaders should never endorse political candidates, compared to 28 percent who countered that they should endorse them and another 21 percent who said they were “unsure,” according to the survey.

“I don’t believe that our leadership team should assert their values on us,” said one Southern California-based Realtor, who said that industry associations should actively make donations to political candidates and causes. “But, there should be an environment of open discussion.”

There was some broad unity to be found among Inman’s Leadership Survey respondents, especially with regards to assistance in the wake of natural disasters.

An overwhelming majority voiced support for philanthropical work and causes meant to “improve society,” including aid for natural disasters such as wildfires that broke out across California in December and hurricanes last summer in Texas, Florida and Puerto Rico. To be sure, about 60 percent of real estate professionals nationwide said their company leadership had offered aid or assistance in response to a natural disaster, while only about 11 percent claimed their employers had donated nothing to victims of natural disasters. 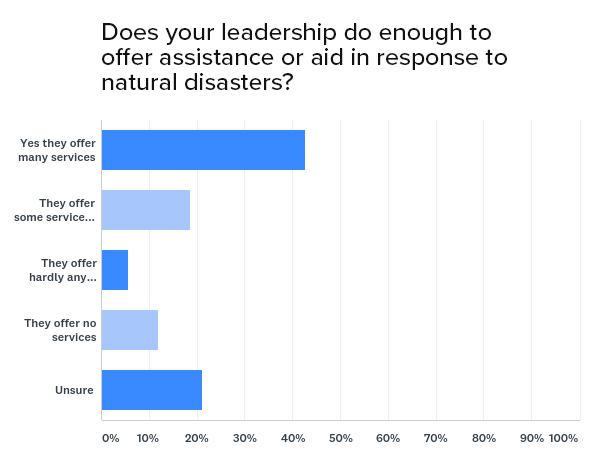 In August and September, when Hurricane Harvey tore through the Gulf Coast, Katie Ruffino and her colleagues at Coldwell Banker Ag-Town Realtors in College Station, Texas, used a company moving van to haul diapers and dog food to those hardest hit in Houston and elsewhere. And when members of the Coast Guard and Navy were stranded at the height of the storm, Ruffino, the lead buyer’s agent for the brokerage, helped feed some 400 of the men.

“They were hubbed here, and they were sent with no food, no anything, and so the Realtors here started a whole sign-up,” recalled Ruffino, who told Inman News that her team sold about 200 residential units last year. “At one point there were 400 guys from Arkansas that came over actually to help us, and we fed them breakfast, lunch and dinner for three weeks.”

“They were saving lives,” she added. “Of course we were going to help.”

What leaders need to weigh

The debate over politics comes as some of the industry’s most visible leaders publicly wrestle with the pros and cons of taking a political stance in a deeply divided country. In January at Inman Connect NYC 2018, Robert Reffkin, the outspoken Compass CEO, and Glenn Kelman, the CEO of publicly traded Redfin, weighed in on the benefits and drawbacks of speaking out politically.

Kelman said that beyond the threat to Redfin’s bottom line, speaking out on social causes runs the risk of alienating employees. Nonetheless, he and fellow Redfin executive level felt the need on multiple occasions to speak out in the age of Trump — once on immigration-related matters following a temporary travel ban last year, and another time, in a private letter, to then-North Carolina Gov. Pat McCrory following the enactment of the state’s so-called bathroom ban.